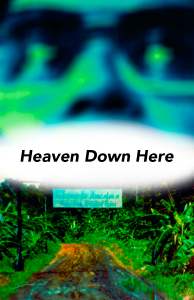 Heaven Down Here is based on happenings at Jim Jones’ Peoples Temple.  Peoples Temple is best known for its tragic end. Over 1000 members, led by Jim Jones, left their San Francisco headquarters and other California locations for Jonestown, Guyana, a commune founded by the Temple, in August 1977. On November 18, 1978, 909 of the residents were killed, most from cyanide-laced Flavor-aid.  It was a massacre Jones orchestrated himself.

The massacre shocked many who had worked with the Temple. Jones, a white pastor, seemed to be a promising social justice leader. He reached out to the poor, elderly and African-Americans. They formed a community based on socialist ideals and vibrant Pentecostal worship.

Like Jones and many Temple members, I am a left-leaning Christian, familiar with Pentecostal worship, and passionate about racial and economic justice. This project allows me to meditate on the story through music, to avoid repeating this tragedy.

The work depicts two worship services in a re-imagined “last day” in the San Francisco Temple before the mass-exodus to Guyana. In the moment between them, Jones decides the Temple is threatened in the US, and they must escape.

Music is derived from African American Pentecostal worship music, a familiar sound to Temple Members.  Spirituals and community songs are quoted directly.  This style is infused with experimental harmonies and avant-garde improvisation, mirroring the radical and provocative theology Temple members hoped to embody.  The libretto is compiled from Peoples Temple transcripts and other sources.  Read my full composer’s notes here.  It was premiered June 25th at First Congregational Church of Oakland, CA, and performed again June 28th.  Contact me if you are interested in performing this piece.

CD’s and digital recordings are available here.  DVDs available here.  Follow the Facebook page for other updates. Support the performance of this piece at the 2017 National Opera Convention. 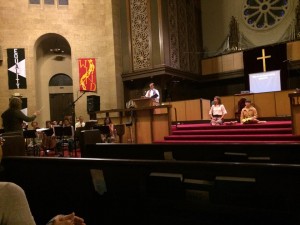 Samples from the June performance:

More information in my interview by Diego Villaseñor.